These shrimp tacos are so good that you will forget all about the other versions of tacos! I promise they’re going to be your new favorite recipe. And they can’t get any easier than this. Easy marinade, no cooking beforehand – just a few minutes in the pan and you’ll have these babies on the table!

I always say this, but it is worth repeating, I am so dang lucky my husband can cook. Before I met him, I ate if/when it was easy or made for me. I ate an embarrassing amount of LIFE cereal (with water, not milk because I was too lazy to go to the store), PB&J sandwiches, and canned baked beans. I know. I know. You don’t have to rub it in; I am a weirdo and slightly disgusting.

Like, I said in the first sentence, I am so dang lucky my husband can cook.

Caleb not only loves to cook but is also pretty dang amazing at it. He loves reading food blogs and always has. I remember when we first started dating in October of 2014, he would always send me recipes from Closet Cooking so we could make them together. Psst: Our favorite is his Roasted Butternut Squash with Caramelized Onions and Sage

Anyways, Caleb makes the best food, and he has been carving out time in his schedule to cook more often.

He usually opens the fridge, scours the pantry, carefully evaluates what we have, and then comes up with something phenomenal. He loves creating dry rubs and experimenting with spices. He loves playing around with different techniques and flavors – this week, it was Cajun.

Fun Fact: Did you know Cajun cuisine originated in a seventeenth-century French settlement in Nova Scotia? Cajun cuisine is a style of cooking that incorporates West African, French, and Spanish cooking techniques in the region of Louisiana. Cajun cuisine is sometimes referred to as ‘rustic cuisine,’ meaning that it is relatively simple based on locally available ingredients and preparation. If you’re interested in reading more, the book Stir the Pot discusses the history of Cajun cuisine.

Yesterday, he made the greatest Cajun tacos … ever.

No joke! During a ZOOM call, when he was asked by a co-worker what he had for dinner, he replied, “I had the best Cajun shrimp tacos ever.”

Woah. That’s a bold statement, I know. But he wasn’t lying.

After we ate them, we had a margarita (or two), and I begged him to recite “the recipe.” Without further delay, here is his recipe, “The Best Cajun Tacos I’ve Ever Had,” straight from Caleb, word for word. Enjoy!!

The easiest way to make these tacos is to use raw or frozen, peeled, and deveined shrimp. Once thawed, marinate shrimp with soy, honey, olive oil, and a cajun seasoning blend for up to 24 hours. Aren’t our taco holder trays cute? You can snag these on Amazon, too!

Caleb used BADIA Seasoning Louisiana Cajun Seasoning; you can buy it on Amazon. Pre-made Cajun seasonings consist of a blend of salt with various spices, the most common being cayenne pepper and garlic. The spicy heat comes from the cayenne pepper, while other flavors come from bell pepper, paprika, green onions, parsley, and more! 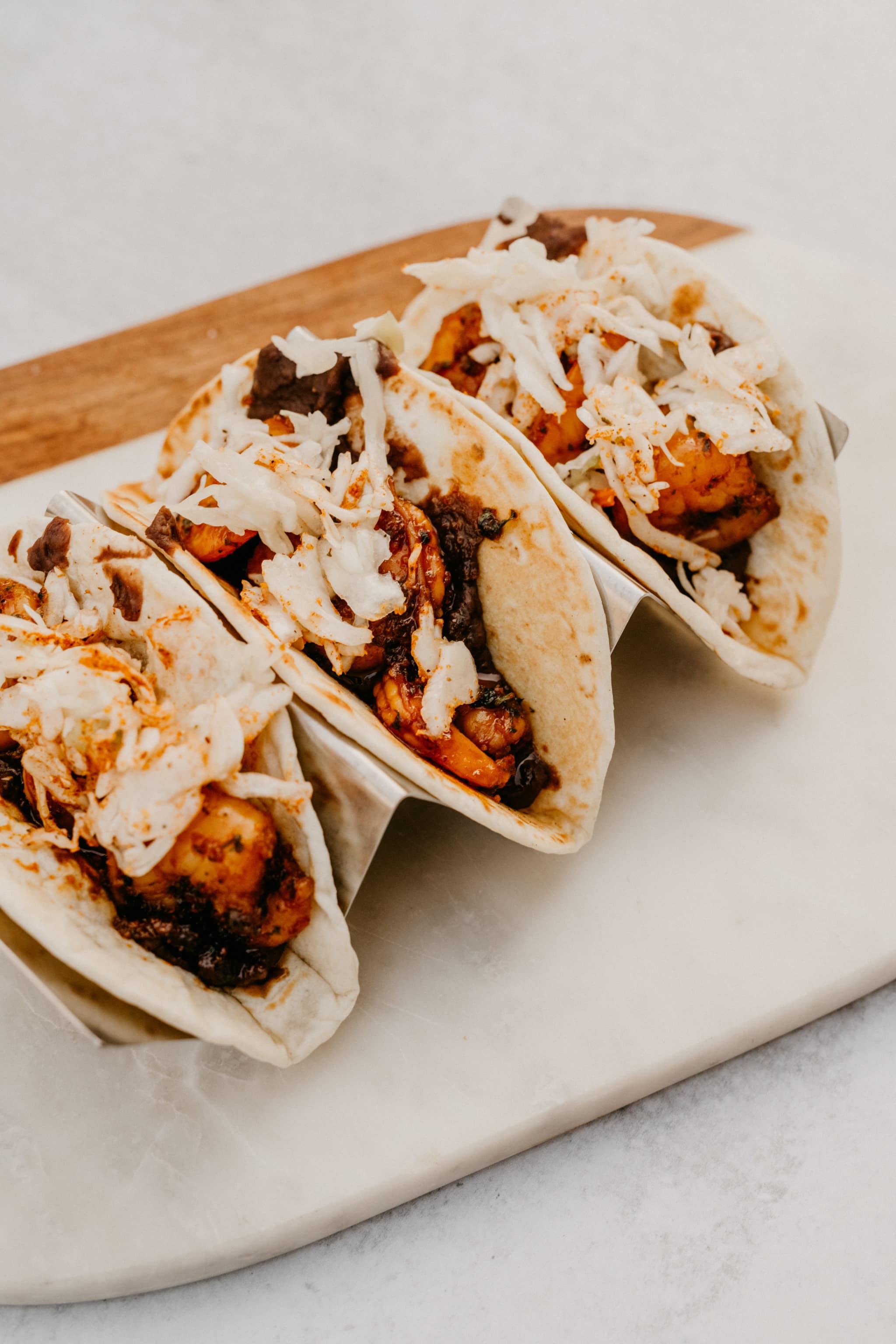 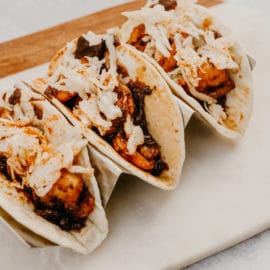 Caleb makes the best food and he has been carving out time in his schedule to cook more often. He usually just opens the fridge and scours the pantry, carefully evaluating what we have, and then comes up with something phenomenal. He loves creating dry rubs and experimenting with spices.Yesterday, he made the greatest cajun tacosever. No joke!
Print Recipe Pin Recipe
Prep Time 1 hr
Cook Time 15 mins
Overnight Marinade 1 d
Course Main Course
Cuisine Mexican
Servings 6 tacos

The easiest way to make these tacos is to use raw peeled deveined unfrozen shrimp. Once thawed, marinate shrimp with soy, honey, olive oil, and a cajun seasoning blend for up to 24 hours.
Keyword cajun, marinade, tacos 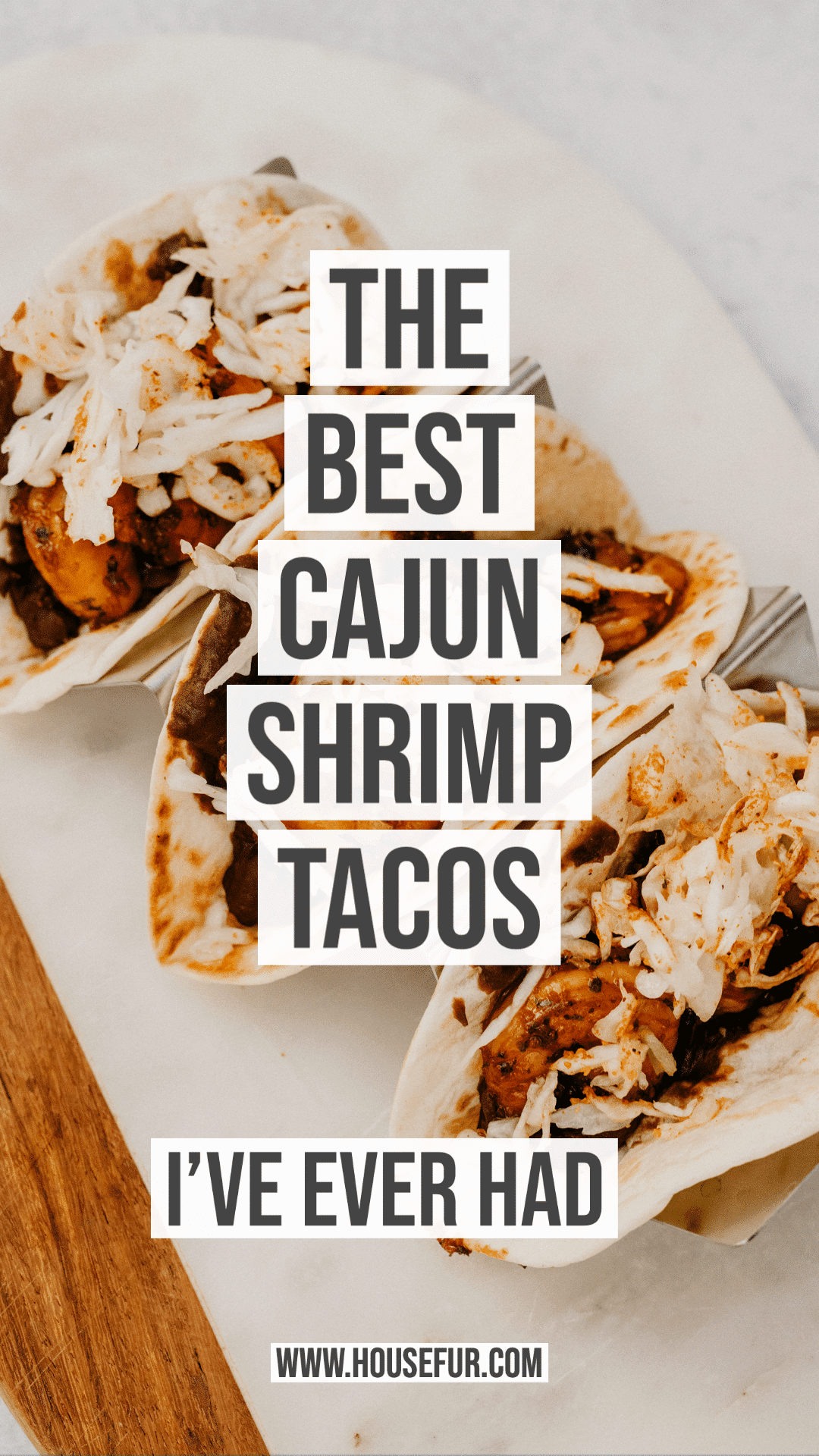