I know you’re all wondering what the deal is with these gardens gnomes. They’ve been around for centuries. But do you know why? They are mythical creatures that make sure your garden stays safe and protected from bad luck! All it takes is one glance at their little white hats to see how cute they are!

What is the point of putting garden gnomes in your garden? Why not just plant flowers instead? Gnomes, those cute little figurines, are found in many gardens, especially in Europe. But why? Why do people put these little statues out…sometimes annoying their neighbors?

Where did this practice originate? Garden Gnomes have been around for centuries, but it wasn’t until the late 1800s that their popularity took off. These little statues can be found in gardens all over Europe and North America. What’s so special about them, anyway? Let’s talk about where these little guys come from and why. Oh, and why they are almost all men.

The History of Garden Statues

Garden gnomes are a creative and amusing way to spruce up your garden. Gnome enthusiasts claim that these statuettes add color to otherwise bland yard spaces, bring more amusement than annoyance into the lives of passersby, and provide an odd yet cherished conversation starter with neighbors and visitors alike.

However you feel about them – whether they’re just there for decoration or serve as guardians against evil spirits – it’s hard not to appreciate the story behind their origins!

The history of the garden gnome is unclear; some sources cite German lore, while others find references dating back at least 150 years ago in Europe, where they were often used as doorkeepers by villagers on farms who believed this practice would ward off mischievous spirit creatures called kobolds (a mischievous, small, pointy-eared, goblin-like creature) who usually helps with chores and gives other valuable services, but who often also plays tricks and pranks on members of the household.

Others think these little statues have been around since the 1800s and were often used as doorkeepers or gate-protectors in front gardens.

In Europe, grotesques, or ugly hunchbacks, were popular in the Renaissance and Romantic periods, which may have influenced the first gnomes. Statues of various kinds were famous informal English gardens across Europe.

Putting statues in one’s garden dates back at least to the time of Rome. Romans often put statues of the fertility god Priapus in their gardens (Be aware, he is a fertility god. If you know what I mean). They thought his presence in effigy would help the plants grow faster.

So, What About Those Gnomes?

They started to show up in the 18th century, and in about 1800, their creation began to take off in Germany. As gnomes spread across Europe, they were eventually mass-produced.

Then the World Wars happened and wiped out Germany’s gnome production factories. Gnomes didn’t really come back until the 1960s. Fortunately, quite a few of those antique terracotta gnomes have survived.

Most modern gnomes are made of plastic and tend to be particularly cartoonish, but some companies still make good-quality clay and resin gnomes. Disneyfied gnomes, including ones that recall Snow White, are popular. Since the 1970s, novelty gnomes, modeled after politicians and celebrities, have become popular.

Of all the things we could put in our gardens, why gnomes? Why not, for example, statues of puppies? (Okay, some people do have figures of puppies).

In folklore, gnomes, which may mean “earth dweller,” were a kind of fairy that lived underground and guarded treasure. They’re also called hobs in England. (If this sounds a bit like Tolkien’s dwarves, there may be a connection there).

Most garden gnomes have red hats. Why? There are multiple theories, but the common one is that they resemble hats worn by Mediterranean fishermen. They are probably not related to the English/Scottish border dwarf variant called redcaps, which are murderous little critters that are violent and bloodthirsty and dye their hats in the blood of their fallen enemies. Or anyone else they can catch.

Although gnomes do come from various folklore sources, garden gnomes tend to the garden and protect you. (This is why they are often depicted in dynamic work such as gardening or fishing).

As for why they’re almost all men? The answer appears to be a tradition.

Gnomes are still considered lucky in many ways, if not protective. While most people who have them would deny being that superstitious, there’s no hiding that some people are that superstitious. In most Europe, gnomes are more prevalent in working-class neighborhoods (and some people in England consider them to be a relatively working-class choice of decoration), perhaps because of their association with industry and doing well for yourself.

What is the deal with Gnome Liberation?

We can’t end our talk about garden gnomes without discussing gnome liberation. Maybe it started with Sir Charles Isham, who popularized gnomes in England after coming back from Germany with 21 and setting them up as if they were mining his rock garden. At one point, some of his gnomes went on strike! (He was big on worker’s rights).

But the Garden Gnome Liberation Fronts showed up more recently, starting in the 1990s. These semi-organized pranksters “liberate” gnomes by stealing them, typically then posing them as “freedom,” although one group in 1998 set up a mass suicide of 11 gnomes, hanging them by their necks from a bridge. And they still show up every so often, so keep an eye on your gnomes!

Garden gnomes bring luck and, in many places, also symbolize the value of hard work. They’re also not the most attractive thing to everyone, but if you like them, more power to you!

Where do I buy a garden gnome?

If you’re interested in purchasing a garden gnome, there are a few different places you can go. You can buy them at garden centers, home improvement stores, or online. Here are some adorable garden gnomes I’ve found online, all available for purchase: 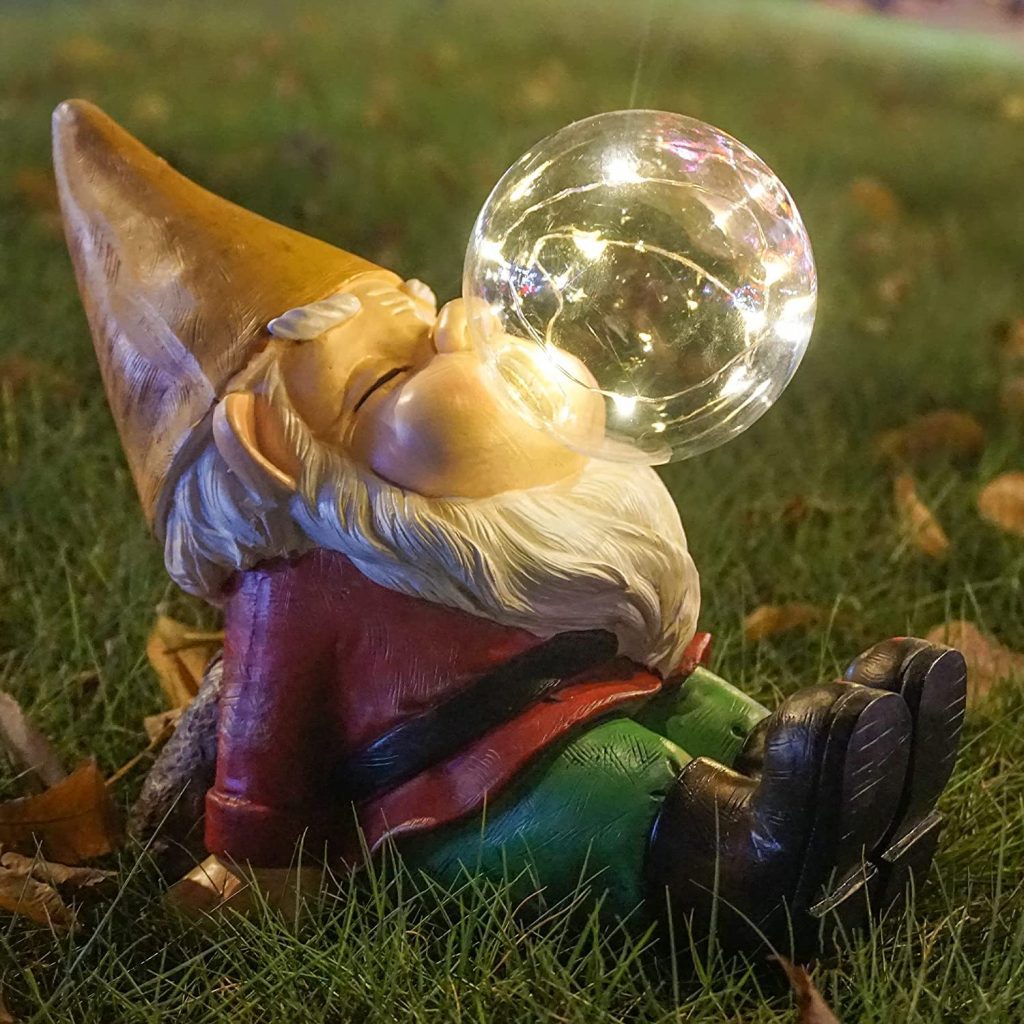 How insanely cute are these four concrete garden Gnome statues! Each Gnome is made one at a time and may vary slightly in texture and color from each other and the picture due to the sand and gravel.