If you have a love for plants, then you are probably looking to purchase some Ficus Elastica plants. Many types of Ficus Elastica trees are available, such as the Tineke and Ruby.

The ‘Ficus’ part is the genus – these plants are in the same genus as fig plants – which you may recognize as the extremely popular houseplant Ficus Lyrata, or fiddle-leaf fig, and over 800 other species. Ficus Elastica is also known as the Rubber Tree or Rubber Bush because it produces a substance called latex, which was once used to make rubber. Isn’t that fascinating?

You can see how their names came from how people thought of them to be similar to:

Fun Fact: All parts of the plant contain an abundant milky white latex, which has been tested for use in the manufacture of rubber, but without economic and technical results; commercial rubber is actually produced from the sap of the Hevea brasiliensis. Ficus elastica yields a milky white latex, a chemical compound separate from its sap and carried and stored in different cells. This latex was formerly used to make rubber, but it should not be confused with the Pará rubber tree (Hevea brasiliensis), the primary commercial source of latex for rubber making. Just as with Hevea brasiliensis, the latex of Ficus elastica is an irritant to the eyes and skin and is toxic if taken internally. – Wikipedia

The leaves of the Tineke are variegated green with cream or yellow. Baby plants and new growth at the top of the plant may have a pink tint that will fade over time.

On the other hand, the Ficus Elastica Ruby has leaves with variegated green, cream, and very vibrant pink, coral, or red color. The babies and new growth are very dark red, and some even are completely solid without any variation.

Because of the slight pinkish color of the new growth of Ficus Elastica Tineke, it can sometimes be mistaken for Ficus Elastica Ruby. That happened to me – I bought it from an Etsy seller who accidentally labeled it wrong.

An easy way to know is that Ficus Elastica Ruby will have bright red or pink sheath around the new leaves before they uncurl. 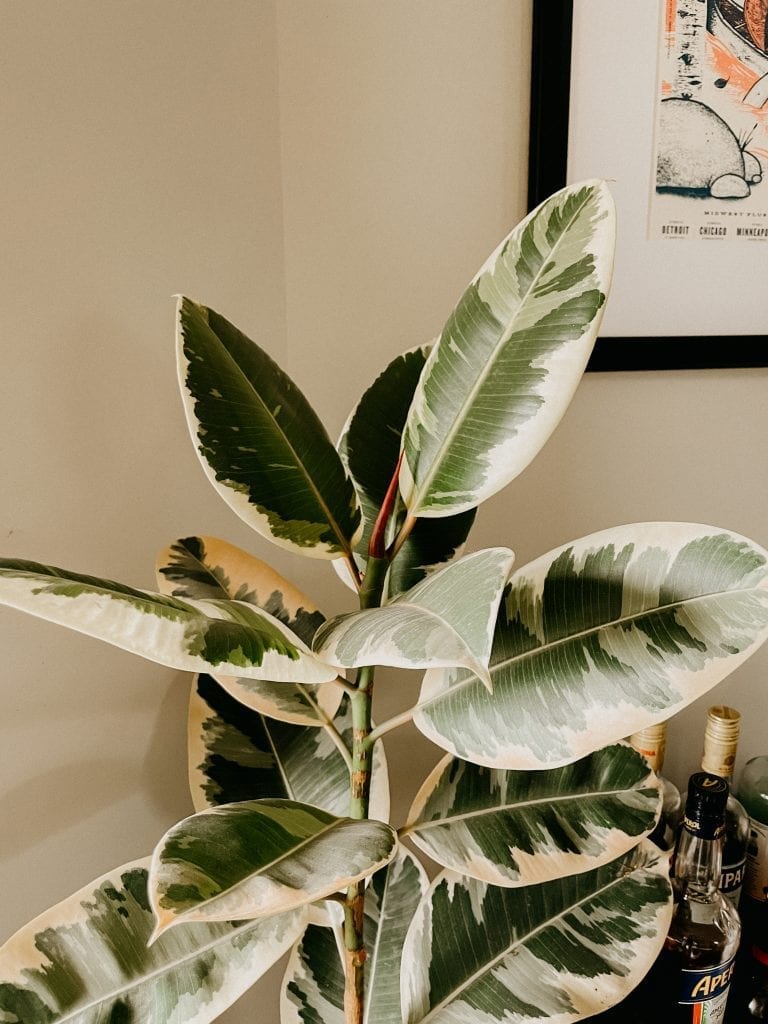 Both Ficus Elastica Tineke and Ficus Elastica Ruby are growing in popularity and are quite widely available. Tineke has been around a bit longer as a variety and is slightly more common.

To keep the coloring and variation on your rubber plants you will want to make sure they get bright but indirect light. If you keep them in lower light, the color and the variegation will fad and they will become practically solid green. During the winter I like to use additional lighting to help my plants keep their bright colors and variegation that I love so much!

Because non-green parts of their leaves can’t photosynthesize, they do not make food as easily as their non-variegated cousins (Burgandy Rubber Plant). Variegated plants need lots of bright but indirect light to be able to make enough food. If you notice your variegation and color diminishing move the plant to a brighter area.

They will start to get upset if the temperature drops to 50°F (10°C) or lower – keep this in mind when transporting or moving with your houseplants.

Like most houseplants, Ficus Elastica Tinke and Ruby are sensitive to rapid changes in temperature and they should not be put near A/C units, heaters, or in a drafty area.

As with most houseplants, overwatering is a bigger problem than underwatering – do not kill them with kindness! Overwatering can lead to root rot and eventually cause your plant to die rather quickly. Water requirements for rubber plants are consistently moist but never soggy.

Always check the soil and feel for dampness. If the top 2-3 inches of the soil are dry, you may safely water your plant. If you feel more comfortable, you could use a moisture meter. The larger the pot the further down you will need to test for dampness.

Easy draining soil is perfect for the Ficus Elastica Ruby. The best potting mix for rubber tree plants is well-draining and slightly acidic with a pH ranging from 5.5 to 7.0. I do a mix of 80% potting soil to 20% perlite.

How fast does Ficus Ruby grow?

With perfect growing conditions, you could see growth rates of12 to 24 inches per year. Proper fertilizer may speed up the growth significantly. 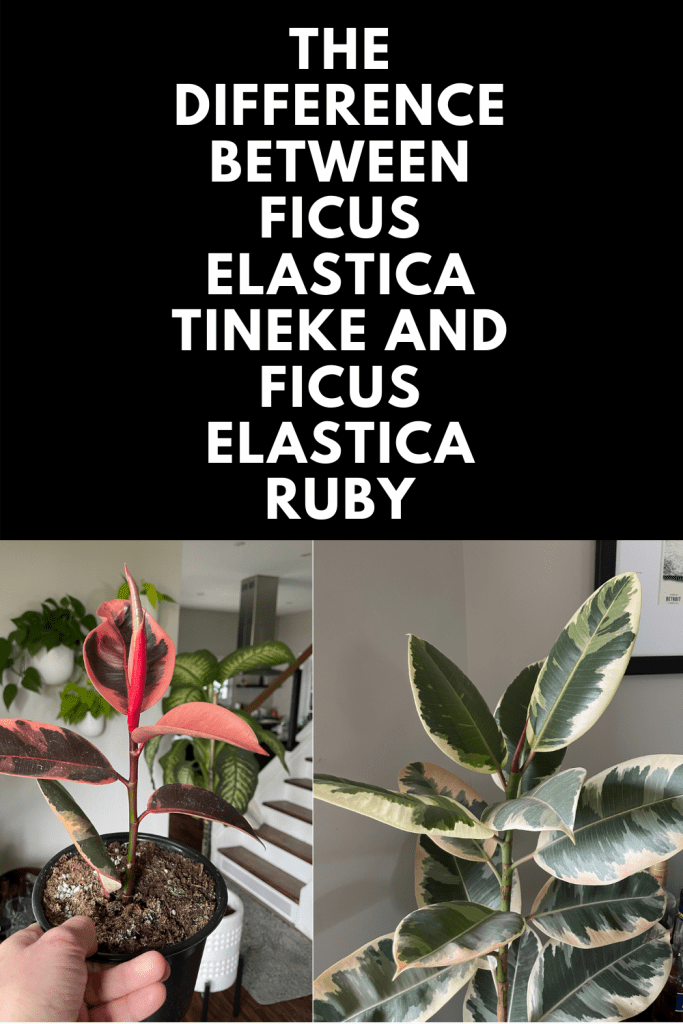